Shoushan Stone is divided into 14 types 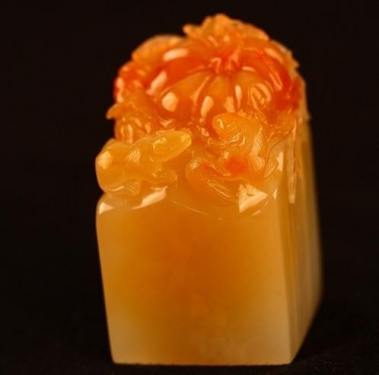 (1) Tianhuang Ishida Yellowstone is the best of Shoushan Stone, and is known as the "Stone Emperor" in ancient times. Its yellow color gradually changes the color of the original stone under the permeation of iron, manganese, vanadium, aluminum, etc., and forms yellow color. Therefore, someone has compared the yellowish yellow field yellowstone to the â€œMiu Xian Jia Liâ€. Tian Huangshi's color tone also has a characteristic. Some of Tian Huangshi's tone is the same in appearance, while others are different in appearance and in appearance. They are generally known as â€œnot ripeâ€ and lighter colors are more â€œyoungâ€ and shorter. . This is also one of the methods for easily identifying the advantages and disadvantages of Tianhuang Stone. This is due to the difference in external conditions and the influence of the nature of the medium at the time of accumulation. From the beginning of the Ming dynasty Zhu Yuanzhang, Shoushan Stone became a royal seal, and there was an episode of â€œGold is easy to get, and Tian Huang was hard to come byâ€; Tian Huangshiâ€™s seal will not fade within two to three years, and other gold and silver seals will fade. For example, in the north, only the Shoushan Stone can be printed in winter. Seals, other gold, silver and India can not touch ink.

(2) The names of alpine stone alpine stones, some of which are directly named after caves, such as Taijitou and Jimuwo alpine stone, and most of them are named according to the different characteristics of color, texture, and texture.

First, the color rich and bright, red, white, yellow, black and all colors, or thick or light, or solid color or color and white, the color circle is more obvious, the distribution of color has a certain law.

Second, compared with harder stone species such as pits and flagstones, the texture of alpine stones is slightly softer.

Third, the transparency of the alpine stone is strong, that there is "spirituality", so the texture is more obvious.

(4) The moontail stone, also known as cowtail stone, is produced in the foothills of Mount Moon-Mount, which is connected to Shanshan. Moonlight is lush and verdant as if it were a beautiful woman. Fine texture and loose, slightly transparent or opaque, occasionally white or green spots in texture. There are two types, green and purple, with different shades of color.

(5) The flag falling stone is a kind of hill pit stone, which is produced in the north of the Shoushi Village. According to the color, it can be divided into yellow flag, red flag, white flag, purple flag, rainbow flag, and silver flag. The texture is delicate and moist, opaque, and it is the most resilient in Shoushan Stone.

(6) Bingyangshi belongs to the Liuling vein and is produced in the draining ridge of Bingyang, north of Shoushan village. In 1997, it was found to be a mineral seedling. In 1998, it was mined in stone, and after the stone was taken, it was named after the name of the village. The texture is delicate and pure and slightly firm, slightly transparent, with red, yellow, white, black and other colors, bright color, clear color, and fine crystalline stripes in the texture. The size of the Bengyang stone is relatively large, and the stone shape is relatively flat. It is an ideal material for making stone seals. The only drawback is that there are more small cracks.

(7) Litchi extraction The high-altitude stone production cave is located in the middle part of the north of the mountain. Since the hole had been littered with lychee trees and the stone is white, it resembles fresh litchi meat. Therefore, the litchi was taken as the name of the stone and it was first built in 1987. The stone is exceptionally good, and it is a rare stone that is rare in high mountains and stones in the past 40 years. Sexuality, texture looming coarse radish lines, color to white, there are yellow, red, gray and white and white.

(8) Putianshi is a new stone species in the 1980s and is named after Yamagata Rugao. It is produced in the valley of the high mountain in the northwestern Qinshi Village. Better white, there are red, yellow, white and other colors, there are radish lines, transparent strips, stone is loose, lack of fat.

(9) Shanshan Cave is located at Linxi, Dulingkeng. During the Qing Dynasty, Xianfeng Village and Village of Shoushan, a villager in Shoushan Stone Village collapsed and died in the quarry. Later generations called the cave a good burrow. After that, it stopped production for 80 years until it was re-mined in 1938. The stone is greasy, with gold sand spots (peanut cake), colorful, translucent, and slightly firm.

(10) The jade stone is also known as "the beautiful drunk stone." Produced in the hilltops of Ducheng, in ancient times, Coats built their homes on the top of the mountain, and they were named after a beautiful stone. The stone is delicate, slightly transparent, reddish in the stone color, and red, white, gray, etc. The texture contains golden sand spots.

(11) The origin of the snake stone is located in the south of the Hangengshan Mountain. The shape of the mountain is like a quail, and it is said that in ancient times there were many snakes, hence the name. Fine texture and Microsoft, slightly transparent, red, yellow, white, black mixed, more colored spots, color blocks and gold sand spots.

(13) Wutou Buddha pitstone is produced in Monkeywood Hill, the site of the cave, an ancient female temple, after the waste site, there was a stone farmer dug this time, found a headless Buddha, hence the name.

(14) Huazhu Pit Stone is produced in the right side of Laoshan Mountain and is very rich in stone color. It often has various colors of red, yellow, white, grey and green. It is strewn in stone, streaked and stratified by texture, and is of a strong and qualitative nature. Crude. Like a peony that contains gongs, it's called "Hua Hang."