December 31, 2019
"The crocodiles' shirts must bear in mind the spirit of Hong Kong that we hold together!" said Lin Weishan. To this end, Crocodile Company launched a series of celebration activities. The three-dimensional painting of "Golden Crocodile" is one of them. 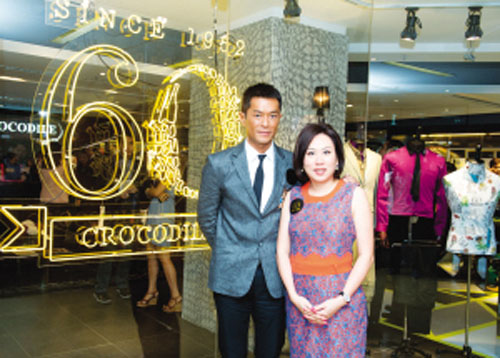 Working every day, Lin Weishan is around this small crocodiles trademark group. For her, this small crocodile seems to be very familiar, but because of the work is too busy, Lin Weishan did not have time to read its history. One day, my colleagues told her: â€œThe Crocodile's shirt is sixty years old!â€ Lin Weishan, the third generation chief of the Crocodile brand, realized that this little crocodile has been standing in Hong Kong for 60 years. "Oh, I must stop and read the story of the Crocodile." Lin Wei Shan said.

This brand, which sprouted in Hong Kong, China in the 1950s, took great strides in mainland China in the late 1980s. It feared the wind and rain, and survived every difficulty with the cruelty of the crocodile. Hong Kong people all like the famous song "Below the Lion Rock." This first song, the lyrics of Luo Wen and the vocals of Luo Wen are hailed as the representatives of Hong Kong spirit. Lin Weishan particularly likes the following lyrics: â€œIt is the same boat that is under the Lion Rock and is helping each other, throwing away and seeking common ground... Everyone in Hong Kong strives to write it down with hardship, and immortalized famous Jiangjiang.â€

Focus on the development of second-tier and third-tier cities

Lin Weishan: From the 1950s to the millennium today, we have experienced a lot of ups and downs, there are difficult and beautiful scenery, whether anxiety or worry, will be spent together. In the past 60 years, the society has achieved a crocodial shirt. The 60 years of crocodiles have also been a witness to the development of society. Therefore, we have also adopted the theme of "eternal classic golden crocodile character" for this 60th anniversary.

Reporter: At present, the stores of crocodiles have been distributed in various regions of the Mainland. Which of these stores is the best?

Lin Weishan: Nowadays more and more internationally-renowned brands are occupying the Chinese market, and the competition in the clothing retail industry has become increasingly fierce, especially in high-end clothing in first-tier cities. The economic development of the first-tier cities is relatively mature. The average income of the people has been improved, and the spending power has been relatively strong. However, the development of second- and third-tier cities is also growing rapidly. We believe that there is great potential for future development. Therefore, we will develop business in second and third-tier cities such as Chengdu to further increase the market share of crocodiles in the mainland market, and local sales will also increase. Satisfactory.

Reporter: How does Miss Lin feel about the changes in the business environment and consumption concepts in the Mainland? .

Lin Weishan: I have often travelled to Hong Kong and the Mainland for many years and witnessed rapid economic growth in China. As just mentioned, the competition in the high-end clothing market in first-tier cities has become fiercer because of the capture of a number of internationally renowned brands. However, the potential for future development remains high.

With China's economic growth, people's consumption concept has become more mature, more emphasis on the brand, in addition to emphasis on practicality, brand awareness is also a factor consumers consider. Therefore, in addition to the â€œShirt Expertâ€ advantage, we have extended the theme of Urban Traveller, which is to provide the most suitable and practical business travel apparel with functional and high-quality fabrics, and actively increase with different activities and marketing. Brand awareness. In recent years, through active participation in public welfare and charitable activities, as well as the promotion of environmental protection concepts on selected materials, the brand's contribution to society has been reflected. We widely use online media to promote the brand of crocodiles, from e-commerce to micro-blog, and constantly use various methods to communicate with customers to understand the needs of customers.

Reporter: What are the differences between consumers' tastes in the Mainland and Hong Kong? For this difference, what measures does the Crocodile shirt take in product design and store distribution?

Lin Weishan: Even if it is the same domestic consumer, there are differences in product selection between North and South. It is as if the consumers in the south are closer to Hong Kong geographically. They also have more similar styles and colors to Hong Kong's tastes and are more likely to accept new designs and prints or brighter colors.

In contrast, in the north, the choice of patterns, prints, or colors will be based on solidity. The thickness of the selected clothing will vary depending on the weather. For example, if the temperature in winter is low, northerners prefer to buy thick warmth. Outerwear, but because of the heating provided inside, the inner top may be relatively thin. Therefore, we will make corresponding adjustments to the distribution of products in the above situation. The time of launch of the new season will also vary depending on the climate in each region.

In recent years, a large number of foreign brands have entered the Chinese market, attracting the attention of consumers, and the requirements of customers have also been relatively increased. Therefore, we pay more attention to the quality of our products. Rich functional fabrics, such as anti-crease fabrics, cool ice cotton, far-infrared balance temperature fabrics and so on. In addition, we have designed a clothing that can be worn more and more on Urban Traveller's themes to make it lighter for business trips and meet the needs of our target customers for frequent business trips.

Reporter: What is the current sales situation of SMART CROCO, the young deputy brand newly launched by Crocodile Shirts? In the case that many domestic business men's wear have launched new brands of young fashion, how does SMART CROCO segment the market and win the favor of consumers?

Lin Weishan: SMART CROCO, a young deputy brand with CCD (Clean, Charm, Demanded) design concept, was launched in 2011 and is still in its infancy. We intend to invest more resources to increase the number of SMART CROCO stores.

SMART CROCO mainly targets young men and women working in their 20s and 30s. They all like simple, personalized clothing, and are very particular about their collocations, so SMART CROCO's products also focus on easy-to-follow, easy-to-create personal styles, so that they can be more like our brand. We are convinced that in the future there will certainly be more young office workers walking our streets wearing our branded clothes.

Lin Weishan: We have also noticed that domestic female consumers have become a consumer group that cannot be ignored, especially for young women aged 20 to 30. With rapid economic growth, most women have access to better jobs and educational opportunities, become more urbanized, and tend to express themselves in new ways.

Moreover, womenâ€™s economic independence is also greater than in the past. Even if they are low-paid working-class workers, they can now afford to spend some of their by-products. To target this group of young women with spending power, our young line SMART CROCO not only provides a men's collection, but also fine-tunes product styles to launch women's collections that cater to the trend, creating personalities with high-quality fabrics, tailored and diverse clothing. modeling.

Reporter: Over the years, Crocodile shirts have spared no effort in brand crackdown. What do you think are the major difficulties faced by the current brand crackdown?

Lin Weishan: The major difficulty faced with counterfeiting can be said to be that many manufacturers in the Mainland consider that counterfeiting brand names can raise the price of products by tens of times, causing many manufacturers in the Mainland to use similar trademarks or names to deceive people. Seriously, many guests were misled and purchased fakes without knowing them. This indirectly affected our business.

In order to combat counterfeit products, we have adopted higher-level and functional imported fabrics to win with quality. In addition, we also protect our brand by law, not only registering crocodiles, but also registering related brands of â€œCrocodileâ€ to try to block fake designer brands.

Moreover, Crocodile has offices in many provinces in the Mainland to monitor counterfeit shops and take suit. In addition, we also launched a number of celebrations through the 60th anniversary of the brand's founding, strengthened publicity, strengthened consumer awareness of brand positioning, gained more knowledge of authentic crocodiles, identified the right goods, and fundamentally eliminated counterfeiting. Products.

Crocodile-shirt brand has always been known for its high quality. Generally, the products sold in counterfeit shops with mixed-water fish have a big gap with us both in terms of technology and quality. In fact, consumers who are familiar with our brands and products generally know the real crocodile shirt products.

Reporter: More and more brands tend to open multi-category flagship stores. Will the current status of sales of alligator-type shoes and leather goods be changed?

Lin Weishan: At present, accessories such as shoes, leather goods, stationery, etc. of Crocodile are produced by our domestic manufacturers for trademark licensing to ensure the quality of our products. At the same time, we constantly design products related to crocodiles or elements, and add crocodile product styles and categories to meet consumers' increasing demand for accessories products. Our design team has also started the development of footwear and leather products, increased product categories, and designed more accessories for business travel.

In order to crack down on counterfeit products of poor quality, we implement strict supervision and establish a strong international team to strive to provide the best products and services and increase customer confidence in us.

This is a product designed for paper-cut or embroidery products and their derivatives. They are handmade and made with Chinese characteristics and traditional methods.
Embroidery: The hand-embroidered bag material is made of high-quality fabrics, hand-embroidered by a line of embroidered women, and carefully needle-stitched. The Embroidered Brooch is designed with traditional Chinese butterfly shapes and flower shapes as a sample, traditional and retro.
Paper-cut: Taken from Chinese traditional red paper, the paper is cut by Chinese non-genetic inheritors and senior art masters. The shape depends on the local scenery or legends, especially the portrait paper-cut, which is vivid and vivid.